According to a release from the office of District 17, Senator Albrecht joined other state senators from Legislative Districts in October through which Highway 20 runs and on Friday, December 13 heard back on a proposal to rename the highway to the Medal of Honor Highway.

In Nebraska, the American Legion Family has been leading the charge as HWY 20 goes through Dakota County in District 17. Legislative District 17 was well represented by members of American Legion District 3 at the Nebraska Highway Roads Commission meeting held in Lincoln last weekend. The Commission gave unanimous consent to the proposal and the measure has gone to the Governor for approval as states from the Pacific to the Atlantic Oceans are going through this process.

Senator Albrecht is entering her third year serving on the Workforce Development Board and stated that Nebraska’s unemployment rate is low as lawmakers often hear from employers that are having trouble finding qualified applicants for unfilled positions. The Board brings together state, regional and local workforce partners to help build a workforce development system that can more effectively match employers, employees, education and training opportunities.

The Board convened on December 6 for its quarterly meeting and heard about growing coordinated training opportunities, industry-specific partnerships, grants, scholarships and apprenticeship programs across various disciplines including the construction and rural healthcare industries, a growing concern for many in District 17 and throughout Nebraska. Other topics brought forward included efforts to more rapidly respond to unemployment and job connection needs of dislocated workers with the formation of teams that include veterans, employers and other local community members.

Senator Albrecht would like everyone in District 17 to have a safe and joyful celebration this holiday season. Prepare for the unexpected by having extra supplies on hand and a preparedness package in your car that includes a blanket, a warm change of clothes, water and non-perishable food items. It is always a good idea to let friends or loved ones know your travel plans, route and anticipated arrival time. 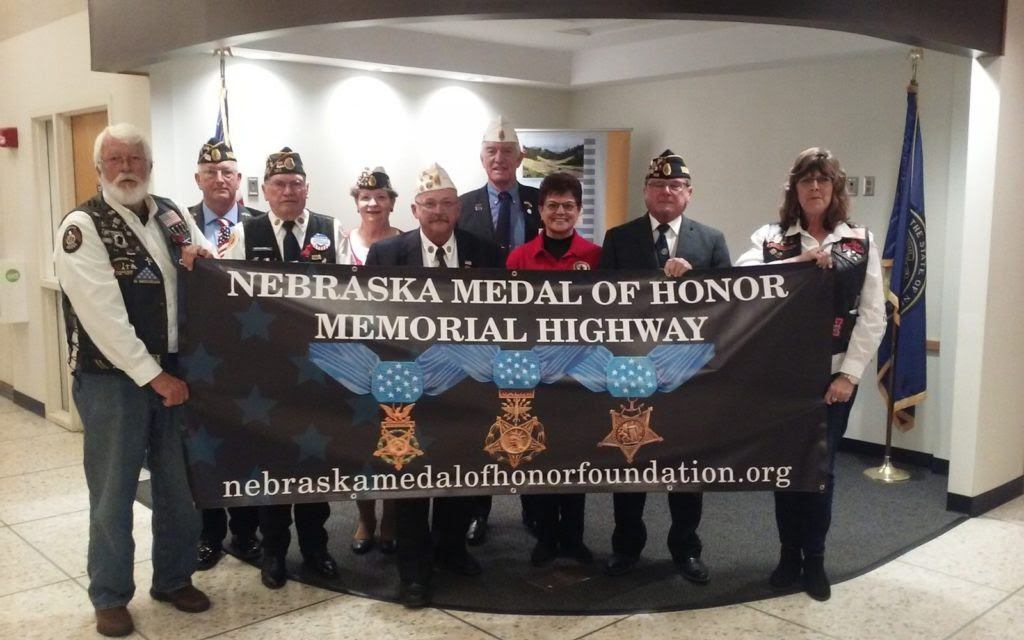 This project passed the Nebraska Department of Roads 12-13-19 in a beard meeting. The project will now go to the Governor’s office for signing.

As you may know states along Highway 20 from Newport, OR to Boston, MA have been working to rename HWY 20 the Medal of Honor Memorial Highway across America.  To accomplish this Am. Legion Past Department Commander Gene Twiford of Laurel, NE began the legwork.  When he reached a point of needing assistance, Ken Hanel of West Point and I stepped in to help him.

A philosophy was adopted that the Nebraska Medal of Honor Memorial Highway (NMoHMH) belonged to all Nebraska Veterans, Active Military, Guard and Nebraska Patriots as a means of paying tribute to our Heroes of Heroes.

On Friday, December 13th, 2019 at 08:30 in Nebraska Department of Road’s Main Building on 1500 So. Highway 2, Lincoln, the Commissioners will decide between 3 applications.  They can only choose one.  The political groundwork had been laid and the Commissioners have been informed that with the support of the Nebraska Veteran’s Council it is the will of more than 30,000 Nebraska Veterans NMoHMH be declared the choice.

This being said it is with great hope that as many Nebraska Veterans as possible can show up for this meeting wearing their hat.  Make it an outing.  Invite your comrades to ride with you or organize a suburban full and head for Lincoln.  We need to show with obvious intention that NMoHMH is the choice to be made.  And then go have a celebratory breakfast knowing you did a good thing for our Heroes.

Once the decision is made it becomes the applicants’ responsibility to pay for signage now and in perpetuity.  For that reason the Nebraska Medal of Honor Foundation has been formed.  It is in this manner  that all Nebraska Veterans, Active Military, Guard, and Nebraska Patriots will be able to support the Foundation’s work.

Ken Hanel and myself are somewhat old school about doing things properly and in an honorable manner.  Therefore, the first fund raising event is called, Walk the Walk.  He and I will be walking across Highway 20 from Wyoming to South Sioux’s Siouxland Freedom Park where we will pass the effort on to Iowa.  All other states west of Nebraska have completed their efforts.  The walk takes place beginning May 11th 2020 and will take 12 days.  This is “our” way of directing Nebraska’s attention to the how we (all of us)honor our Medal of Honor Recipients.

This event allows all that wish, to join us in the walk.  We will keep you in the loop as the event draws closer.

Over Thanksgiving, more than four thousand Army Green Berets will be deployed around the world in more than 70 countries.

Known as the “quiet professionals,” Green Berets operate in utmost secrecy all over the world, from the Middle East, to Africa, to Asia. But every now and then, they are forced into the limelight, revealing their world-class training, skills, and teamwork.

The Nebraska Medal of Honor Foundation which grew from the Highway 20 project wishes to thank the Service Organizations related to the Nebraska Veterans’ Council for their letter of support.

The Nebraska Department of Roads Commissioners will be making their decision between two competitors and our request for HWY 20.  Only one can be chosen. Your letter made it possible to proclaim the naming of the Nebraska Medal of Honor Memorial Highway had the backing of over 30,000 Nebraska Veterans and now the naming will likely take place.  The project is highly supported by Nebraska State Legislators.

It is highly desirable to see as many veterans at the meeting as possible on Dec. 13th at 1500 HWY 2 in the NDoR Main Building at 8:30am.  Encourage your members to help by attending and wearing their hats.  It would be very appropriate to see the command tiers please, from each organization.

The Nebraska Medal of Honor Memorial Highway belongs to all Nebraska Veterans, Active Military, Guard, and Patriotic Nebraska Citizens.  I have included an attachment that provides a break down of the Nebraska Medal of Honor, “Walk the Walk” CLICK HERE.  This walk will be in an effort to create the funding needed to cover the costs of signage now and in the future.  The Foundation exists as a steward for the NMoHMH and is currently being processed for non-profit status.  There will be many opportunities for Nebraska Veteran Organizations across the state to participate in honoring Nebraska’s Heroes of Heroes along this walk.

In the auditorium of Florida’s Seffner Elementary, Medal of Honor recipient Gary Beikirch has the undivided attention of dozens of students.

“The Medal of Honor is about a different way to live your life,” said Beikirch, a Vietnam veteran and former Green Beret. “We want you to truly live, and I want to encourage you to live your life thinking about other people.” 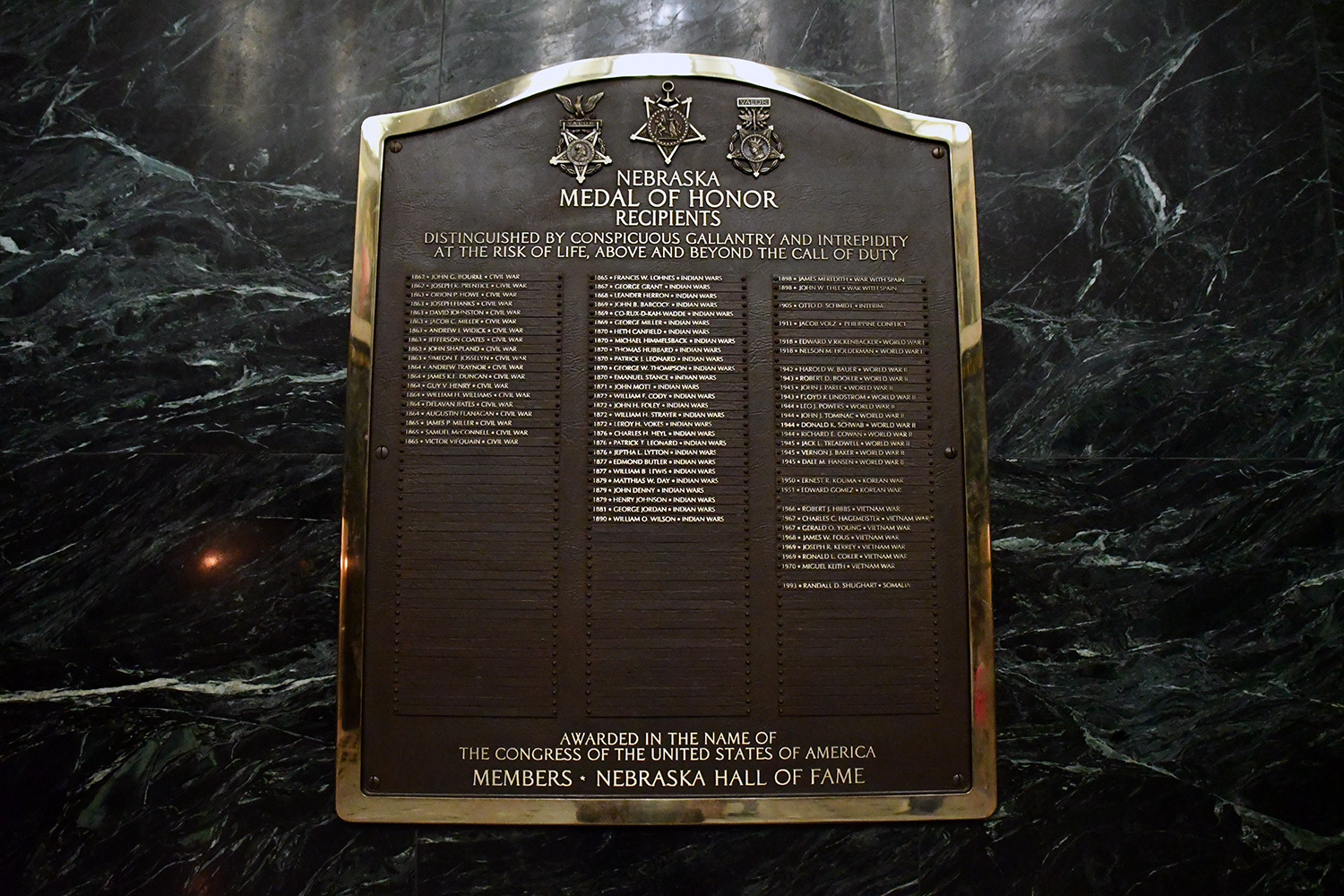 On November 11, 2013, the State of Nebraska unveiled a new, updated bronze plaque with the names of 72 Nebraska Medal of Honor recipients. The Nebraska Office of the Capitol Commission placed the new plaque in Memorial Chamber—the fourteenth floor of the capitol.

The event is scheduled to begin on Mothers Day, May 10.  It will end on May 22nd at Siouxland Freedom Park in South Sioux City, NE.

Attend the meeting on December 13th.  Wear your Veterans hat.  Load your car with fellow vets and make it a day you’ll always remember. Support the Heroes of Heroes, our Nebraska Medal of Honor Recipients.