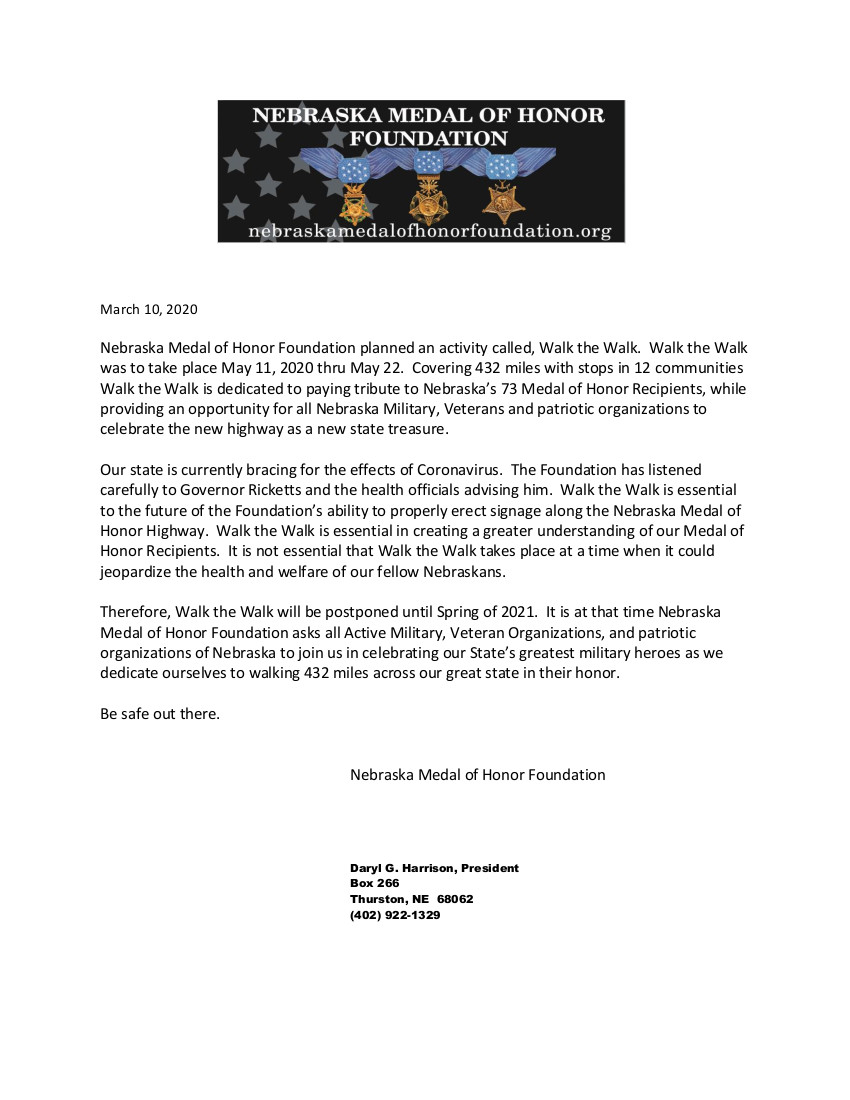 Valentine Nebraska arriving 11.35 CST 40 min gas and rest and lunch at the Crossroads Church parking lot on the east end of town by the Econo Lodge Motel signs will be up. Prime Rib sandwiches and chips for a free will offering.

Daryl Harrison and Kenneth Hanel will walk the walk across Nebraska
One will walk for 2 hours and then the other will take over for 2 hours
They will be followed by RVs and one can rest while the other walks
We are asking the public to please honor them with flag processions as they progress along the route. And show up in numbers to honor them at the towns that they stay in.

The event is scheduled to begin on Mothers Day, May 11, 5 PM.  It will end on May 22nd at Siouxland Freedom Park in South Sioux City, NE.

This event has been approved by the Department of Roads

Attend the meeting on December 13th.  Wear your Veterans hat.  Load your car with fellow vets and make it a day you’ll always remember. Support the Heroes of Heroes, our Nebraska Medal of Honor Recipients.

The details of the walk are still being formulated.  It is scheduled to begin on Mothers Day, May 11.  It will end on May 22nd at Siouxland Freedom Park in South Sioux City, NE.

The Nebraska Medal of Honor Highway belongs to all Nebraskans. This will be the longest named highway in the state and should be source of pride to all Nebraska Veterans and Patriots.

In Nebraska this is no small project.  He had to obtain letters of support from every community and county along HWY 20.  As we neared completion of this first phase, Ken Hanel and Daryl Harrison joined PDC Twiford and began the second phase of gaining the political support that would be needed to present this project to the Nebraska Department of Roads Commissioners (NDoR).

Letters requesting support were garnered from Senator Bob Kerrey (Medal of Honor Recipient) and the Nebraska Veterans Council (Representing all registered Veteran Service Organizations) along with the American Legion passing a resolution of support for the name change.

In those letters we reported that this action has the support of over 30,000 Nebraska Veterans.  We have received a copy of a letter sent to the Nebraska Department of Roads Commissioners (NDoR) by those five Senators supporting the Nebraska Medal of Honor Highway.  This was great day for the project.

Currently we are looking at six signs.  One as you enter the state from either the west end and the east end and two placed at the crossroads of the American Legion Memorial Highway (O’Neil) and two at the crossroads of the Veterans of Foreign Wars Memorial Highway (Valentine).  The NDoR has suggested that if we are successful a spare sign for immediate replacement of a damaged or missing sign should be stored with the responsible Road Superintendent for that region.  Making for a total initial need of 12 signs and the placement of 6.

In Nebraska those that have a highway renamed become responsible for putting up the signage.  Thus, we are at the cusp of beginning phase 3.  Phase 3 is the formation of a non-profit foundation to be named the Nebraska Medal of Honor Foundation.

Within the State of Nebraska it is a state highway that begins on the Wyoming–Nebraska state line west of Harrison near the Niobrara River and runs to the Nebraska–Iowa state line in South Sioux City. Throughout its 431.60-mile (694.59 km) length the route passes through a diverse range of landscapes including bluffs and escarpments in the Northwest Panhandle, the Nebraska Sandhills in the northern part of the state, and rolling hills and plains as the highway approaches the Missouri River valley south of Sioux City, Iowa.

The Nebraska Medal of Honor Foundation.  The NMoH Foundation was formed in response to meeting the needs of a national effort to name Highway 20 from Newport, OR to Boston MA the National Medal of Honor Highway.  To achieve that goal Nebraska and the other 11 states along Highway 20 needed to name their stretches of 20 as State Medal of Honor Highways. The NMoH Foundation reached that goal in January of 2020.  In Nebraska the organization that names a highway is financially responsible for erecting and maintaining the signs.
In response to that need for funds, I and the foundation’s Treasurer, Kenneth Hanel of West Point planned, Walk the Walk, whereas we each walk (3) six-mile segments of NMoH Highway for a total of 36 miles a day for 12 days.  Walk the Walk was originally to take place on May 11th of 2020 but was postponed due to Covid-19.  Each 6-mile segment, each personally walked segment, will be dedicated in the name of a Nebraska Medal of Honor Recipient.  The walk begins at the Wyoming Border at 05:00, Tuesday May 11th of 2021.  We stop for the night in 11 communities where we hope to share supper with our fellow veterans, military, and patriotic
Nebraska citizens as part of the effort raise funds.  Walk the Walk ends at Siouxland Freedom Park on Saturday May 22nd.  Originally, a parade was planned to include families of Medal of Honor Recipients as we walked through So. Sioux City.  We are planning the same for this year.
There is currently a committee working to develop a motorcycle convoy that will start from the Wyoming border on the Morning of Saturday May 22nd and ride through the day to join us in our parade.  The concept has thus far been well received by motorcycle enthusiasts and organizations.  Walk the Walk and the Motorcycle convoy are being used as methods to inform the citizens of Nebraska about their newest and largest Military Memorial.  The event is also a means of bringing together the 31 communities along NMoH Highway under the common bond of being part of a broader community tied together by what will one day be the National Medal of Honor Highway.
Daryl G. Harrison – President – Nebraska Medal of Honor Foundation.
Box 266
Thurston, NE  68062
(402) 922-1329